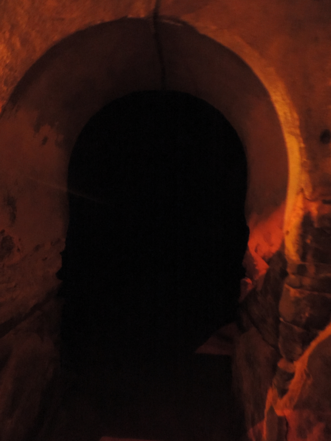 First I wanted to say that my wife and I loved our visit to the Old Jail, when we stopped by on 9/23. The building is amazing and the tour was expertly done, by our young blond host (sorry I can remember her name).  I also bought one of your books which Betty Lou was kind enough to autograph. Anyway, we were intentionally lagging towards the back of the tour, so I could get pictures, with out a whole lot of people in it.

As it happened I was taking pictures in the dungeon, when I realized I was alone (even my wife had gone up the stairs  ) Anyway I took a couple of pictures of the cells before a strong "get the #&*@ out of here" feeling came over me, and I beat a hasty retreat. Two days later I was reviewing the pictures with my 12 year old son...when he pointed out something strange in one of the pictures. It was of the middle cell on the same side as the exit stairwell. I took the picture with my Nikon p520, set on Auto (adjusts the shutter speed and exposure for low light), which I can shoot in near total darkness.  I took three successive shots (no flash) of this cell, with two completely unremarkable...the last one has something in it I can't explain.

You will see the glow of the lamp mounted on the wall just to the right of the cell and the outside of the cell bathed in this orange light. On the  right side of the screen there appears to be a streak of white light that either starts in the total blackness of the cell and shoots outward in a straight line, or the reverse. There was no other light in the dungeon, I was the only one, and the light seems to start in front of the cell entrance way and project into the cell and never touch an inside wall, just vanishing in the thin air. Pretty interesting....never  shot a picture like this before.

The only other thing that happened to me, I was sitting in the entrance near the front door, with my wife, waiting for our tour to start. I was seized by the most overpowering urge to bolt out of the open door and just get away. So much so that I told the wife about it.  I'm a 44 year old married father of four, and I've never felt the urge to RUN!!! like that before.

Thanks so much for you and your staffs hospitality

Ps this picture was not enhanced in any way, or birghtened, just the raw
picture from my camera as I shot it.