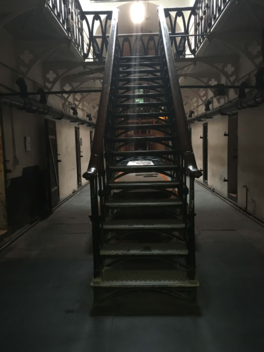 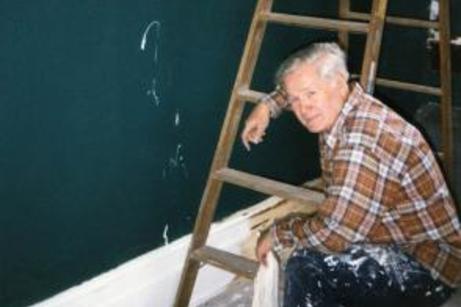 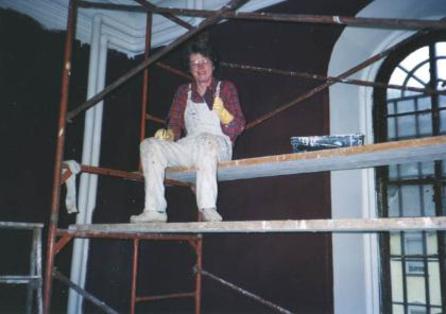 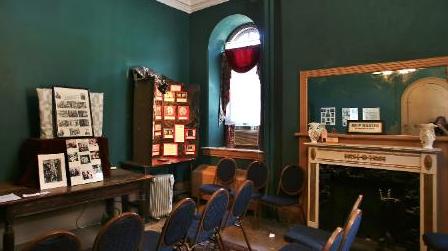 Tom McBride - bringing the Living Room back to it's original spendor 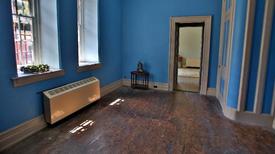 Resembling a fortress standing guard over the town of Jim Thorpe (formerly known as
Mauch Chunk), the historic Old Jail Museum is a  beautiful two-story stone structure.
1995 when it was purchased by Tom McBride and his wife, Betty Lou, of Jim Thorpe.

Containing approximately 72 rooms, this magnificent structure shouts to all "Be good"!
The building has 27 cells, plus basement dungeon cells used as solitary confinement
until 1980, women's cells on the 2nd floor, and the warden's living quarters across the
front of the building. The warden's apartment has a large living room, dining room, 2
bedrooms, and a sitting room. The kitchen for the prisoners  was the same kitchen
used by the warden's family. In fact, for many years the warden's wife did the cooking
not only for her family but also for the prisoners using the same kitchen for both.

The building is best known as the site of the hanging of seven Irish coal miners known
as Molly Maguires in the 1800s.  On June 21, 1877, today known as the Day of the
Rope, Alexander Campbell, Edward Kelly, Michael Doyle and John Donohue were
hanged at the same time on gallows erected inside the Old Jail Museum cell block.  On
March 28, 1878, Thomas P. Fisher was hanged here, and on January 14, 1879,
James McDonnell and Charles Sharp were hanged on the same gallows.

Historians today feel the Molly Maguire trials were a surrender of state sovereignty.  A
private corporation (a coal/railroad company) initiated an investigation through a
private detective agency (Pinkerton Detectives), a private police force (the Coal & Iron
Police) arrested the alleged offenders, and private attorneys (employees of the coal
companies) prosecuted these men.  The Commonwealth of Pennsylvania provided only
the courtroom and the gallows.

Before their hanging, the men proclaimed their innocence and today historians believe
many of the condemned men were falsely accused of murder.  Before his hanging one
man put his hand on the dirty floor of his cell and then placed it firmly on the wall proclaiming, " This handprint will remain as proof of my innocence."  That handprint is visible today for everyone to view even though past wardens tried to eradicate it by washing it, painting it, and even taking down part of the wall and re-plastering it. The handprint was originally thought to be Alexander Campbell's, but after research, it is now thought to be Thomas Fisher's.

Do NOT pass Jim Thorpe, go directly to The Old Jail Museum!   Hear the story of
the condemned Molly Maguires and see the mysterious handprint on the wall.

Needing a scaffold to reach the ceiling.